Influencers: Behind the lens

With more time being spent online, movement restricted and people in need of relief from reality, Covid has undoubtedly changed so much in the world, including the world of influencers. Negative critique is rife in the space but we wanted to see what had shifted behind the lens and see what we could find out by speaking to influencers themselves and influencer marketers.

With all the different definitions and words for influencers (micro influencer, public figure, internet personality etc.), it’s worth asking ourselves whether we have overlooked influence. Has this commodification of influence left us forgetting how significant it actually is? The language we use in this area can feel dehumanising, words like platform or following, which can contribute to our perception of influencers as manufactured rather than authentic. Ultimately we’re looking at human beings reaching and influencing other engaged human beings which in itself is a powerful concept and no easy feat.

Influence and engagement is what every brand strives for yet it is a classic rule of marketing that people want to hear from other people, not corporations. We all witnessed big name brands trying to express solidarity with their customers earlier in Covid with altered logos and reminders to stay safe but these can easily feel impersonal, bandwaggony and generally harder to connect with. But content from influencers has the potential to attract and engage people in different, more personal ways.

From the influencer marketers we spoke to, we heard that behind the scenes, brand relationships with influencers were becoming more collaborative than ever, with influencers approaching them with ideas and being given more freedom to execute ideas. This proves a unique moment in time where many brands had to find something else to say, other than selling their product, which creates more openness, unique opportunities and brand initiatives which influencers can play a key role in delivering to audiences.

Covid has made clearer than ever the influencer’s role as closer to audiences. Usually influencers are closer, but still have an aspirational allure, however during this time that approach could easily appear out of touch. The importance of the collective has been highlighted and that sense of ‘we are all in this together’ is definitely the feeling of the moment, so many influencers were challenged to be more creative with their content during this time. Finding ways to create content that was positive, entertaining, useful, empathetic and above all authentic was a fresh challenge. Not reading the room during this time had the potential to be very damaging so diversifying content for some influencers was a necessary step to take. Areas such as fitness, cooking, cleaning, interior design and comedy, to name a few, experienced a captive audience and catapulted certain influencers into the limelight. 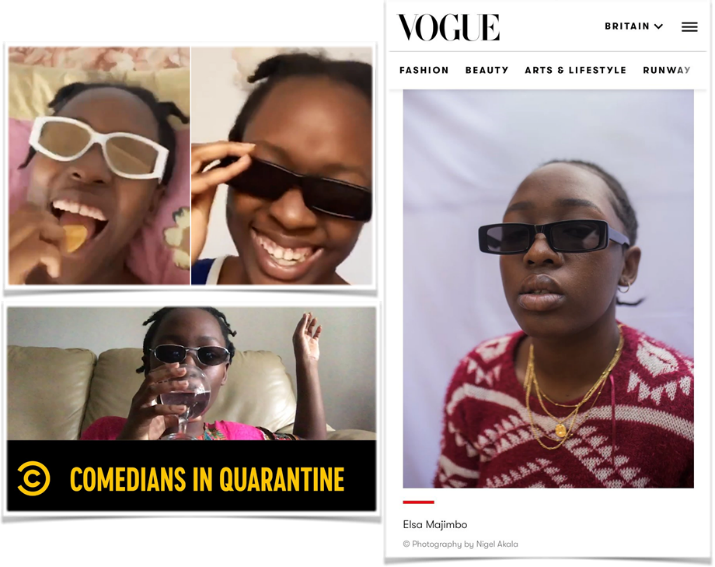 Take Elsa Majimbo, for example. A Kenyan internet comedian who makes viral unpolished videos of herself eating crisps with her signature sunglasses and brutally honest phrases. Besides her sayings making their way into popular internet culture, she has now worked with the likes of Vogue, Fenty, Valentino to name a few and has won awards from GQ and People’s Choice. This cocktail of relatability, a captive audience and virality has taken her to high heights.

Typically, when we hear the word ‘influencer’ we naturally think of the commercial side of this. There is, however, a more community driven side of influencing that is coming to the fore. One of the influencers we spoke to, Stephanie Stokes, built up her audience when she became a new mum. Seeking to connect with others in a similar position, she organically built a community of young mothers that has allowed her to advocate and raise awareness for things like miscarriages, post partum depression and more. Beyond fashion and lifestyle inspo, influencers are appearing as champions for topics from acne to menopause too. Providing people with a third space, not specialist and not quite family and friends, but a space where they hear shared experiences alongside helpful tips and advice. Although online communities are nothing new, it feels particularly timely and the role influencers play in forming and engaging these communities cannot be ignored.

So what are we likely to see moving forward in the influencer sphere?

You can watch the full presentation HERE, or to hear more, get in touch at hello@the-nursery.net